My mother, who was a widow since my dad died five years ago, was doing OK, but not great. At age 91 she lives in a condo by herself. I live in California. She was definitely not going to move here. She said she was too afraid of earthquakes (I live in the desert and didn't tell her about the rattlesnakes). She needed the kind of help only a good friend or close family member could give her, like helping with shopping, going for walks, just having conversations. The great thing about Seniors Helping Seniors is my mother is able to talk and reminisce with helpers who are her generation and share her culture. On some of my trips I've met Paul, Mike and Ed, and they seem like such warm, caring people. Paul told me his mother who had Alzheimer's lived with him until her death. He took care of her, so I know my mother is in the hands of loving, sensitive people I can trust. She says she loves her caregiver, who came over to watch the Academy Awards with her! I couldn't be happier with SHS. Thank you guys.

Seniors Helping Seniors is a wonderful organization which has tremendously helped my Mom achieve a much-improved quality of life over the last few months. The in-home visits from Paul, Ed, and Mike have enabled her to stay in her beloved home. From grocery shopping to doctor appointments, this team organizes a schedule for Mom which makes her life easy and comfortable. I can't thank Seniors Helping Seniors enough for offering valuable services with kindness and empathy.

Since the beginning of the Covid-19 Pandemic, I have been reaching out to both my Providers and Receivers to offer support, help and answer any questions that my staff may have. On a recent call with one of my Providers I uncovered this incident. This is a true and an incredible accounting of the sincerity and devotion of our Providers. The names of the individuals involved have been changed to protect their identities.

Mary has worked with Seniors Helping Seniors Fort Lauderdale and Boca Raton since early 2016. In the fall of 2017, she was matched with Don an early onset dementia Receiver in his 70’s. Mary began working with Don 3 times a week for 3 hours a day.

Mary provided companionship, made light lunches and gave much needed human interaction. They went for walks, trips to the pool, movies and for drives by the beach. They enjoyed each other’s company and were a good match. Don’s favorite activity was to go for a walk ending up getting a Dairy Queen ice cream cone. Eventually, Don’s condition deteriorated. He began to develop “sundowning” and became agitated and difficult to deal with during the late afternoon¬¬ time period.

It was decided for Don’s safety that he would be moved into a dementia facility. Don was subsequently transferred to 3 different dementia facilities as his condition worsened and his care needs increased.

Early in January, Mary went to visit Don one last time at his new dementia facility specializing in very advanced dementia and Alzheimer’s patients. She found Don in grave condition having stopped eating and drinking and totally bed-ridden. Mary began to speak to Don and was interrupted by an Aide to talk. By the time that they had finished talking, the Aide who was facing Don told Mary to turn around and look at Don.

In the middle of Don’s frail condition, he had recognized Mary’s voice and he shed a tear when he realized that Mary was present. Mary understood then what a profound and deep connection with Don she had made. He passed away within a week of that visit.

Mary’s connection with Don and her continued visits to see him demonstrates the type of deep and long-lasting bonds that develops between Providers and Receivers. We will never know what Don experienced that day, however the fact that Mary continued to visit demonstrates the connection that can develop. God bless you for your continued work with Seniors Helping Seniors of Ft Lauderdale and Boca Raton. You, Mary, are a gem and a reason for us to forge on!

I can't say enough about the Seniors Helping Seniors Team! From the first minute I met Ed, Paul and Mike, I could see what kind and caring people they were, always willing to go above and beyond what was expected. I was surprised to find out that in an Assisted Living Facility, there is still so much for a family member to do. Being out of town in Ohio, I am especially grateful to the SHS team for doing what a family member or trusted friend would do for my 95 year old Dad. Everything from driving to Dr appointments and grocery shopping to making sure he doesn't miss the Memorial Day parade and everything in between! My Dad looks forward to the daily visits of his caretakers, seeing them as friends who enjoy a few hours of conversation. I have gone from worrying everyday about my Dad to knowing that he is being looked after and that if something seems wrong, I will be contacted right away. I appreciate the 2 gentlemen that Paul selected to visit my Dad, Ronnie and Edward. Their personalities were perfectly matched and they get along very well together. I don't know what I would do without this team of warm, caring and dedicated people! Thank you for always being there for my Dad, no matter what time, day or night, and for the peace of mind that you all have given me.

My mother fell and broke her hip in May of 2016. The once independent 82-year-old woman, whose husband had died 30 years ago, could no longer live alone. I live in Toronto and my mother being in Boca Raton, I was not able to be a daily caregiver and major decision-maker. My immediate obligation was to find an assisted living situation for a woman who had never asked for help from anyone for anything. My mother’s stern attitude magnified the pressure I felt. Given a two-week reprieve when my mother was placed in a nursing home for rehabilitation, I contacted Seniors Helping Seniors, who helped her with an appropriate assisted living at home. This was the first difficult elder care decision I had to make, though it is certainly far from being the last. Thank you SHS, you enriched my mother’s life with your caring providers.

I went to see my dad in early 2019 in Boca Raton, Florida. I noticed that he is getting on in age and he cannot perform the tasks that he previously could perform a few years ago, such as driving to the grocery store and going to doctor’s appointments. Since I live outside of Florida, I wanted to ensure that my dad is receiving the proper care at this stage in his life.

I do not usually write reviews. But the caring assistance that the Seniors Helping Seniors Organization helped so my father could stay in his home (which was his wish) for an additional three years was just too terrific for me not to send kudos with my review. I left my home in Falmouth, MA to find a nursing home for my Dad. Something he didn't want to do. But i couldn't move to Boca Rotan to watch over him. SHS was a godsend. Thanks!

A recent note we've received thanking us for our assistance and concern during our last hurricane, Irma. 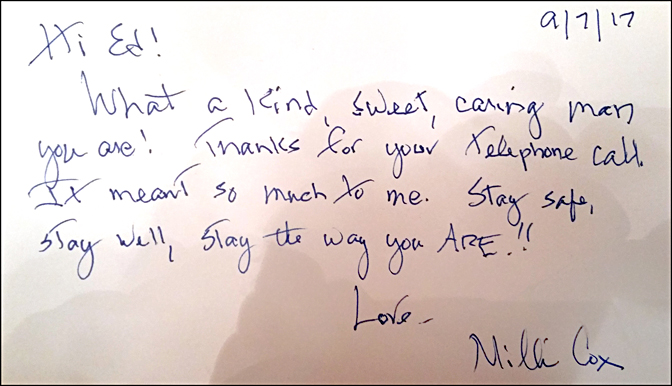 Here is photo of my mom, Mary Ellen, and her caregiver, Lenny, enjoying the day watering her plants...

Thank you, Seniors Helping Seniors for all your help keeping my mom healthy and active!

Seniors Helping Seniors was always there for my Mother. In fact I believe they kept Mom alive and happy in her own home years longer than her doctors predicted. Yay SHS!

Please enter your testimonial without quotations. They are added automatically.

Enter your information below to get started today. *Required field
I cannot thank you enough for your wonderful care of my parents. The care of aging parents is much more emotional than I ever dreamed. Having caring, patient folks like you is beyond measure.
— Grateful family
Read Our Testimonials